Just a quick post this week, to show the results of my Blood Angel Sternguard Veterans. 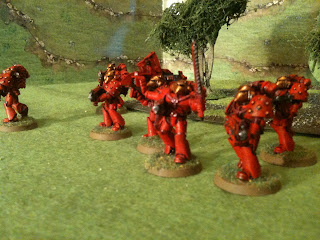 The Sergeant,Chainsward and Bolter, with classic missile launcher behind.

These started off with a black undercoat, then a heavy drybrush/coat of Mechrite Red, the helmets were painted Dwarf Bronze. Then the helmets and shoulder studs recieved a coat of bright gold. Then I inked with Windsor and newton nut brown (my ink of choice!). On looking at the models I thought them to dark at this point and then added the Blood Red, but leaving recessed areas the darker shade, and around the studs on the shoulder pad. Boltgun metal on the weapon details, transfers and varnish, then a simple base job. Et Voila! 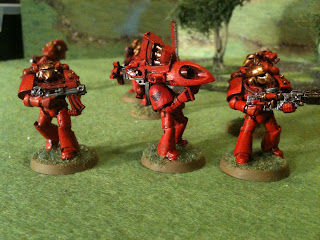 A close up on the classic weapons from left, a classic Bolt Gun,note magazine well forward on the weapon, Missile Launcher, and Meltagun.
All very nice, and just in time for the new Stormraven release. I think these boys need some classy transport!
Posted by DaveWilkin at 16:43 No comments: 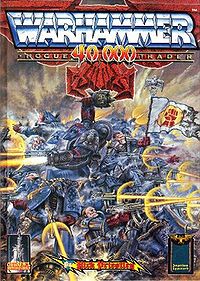 Like so many gamers I have an interest in 40K, or Warhammer 40,000 to give it it's full title. I was first drawn to this system back in it's first incarnation as Rogue Trader,Warhammer 40,00. in the late 80's. With this game I purchased some Space Marines and Orks. I remember I also used a model of the APC from Aliens 2 ,as at the time there were no AFV's available, I think. I did get bored with it after a while and returned to my first passion, Historical. Indeed I gave away the rules, and all the Orks to my Nephew,but did retain 20 or so of the marines in the 1st edition of their armour, now called Mk VI Corvus armour.
About 8 or 9 years ago, my interest in warhammer, and 40K was re kindled, and I purchased the 3rd edition rules. By chance, at the Milton Keynes Show, Campaign, there were lots of the old first release model marines for sale on the Bring and Buy. I purchased the lot! 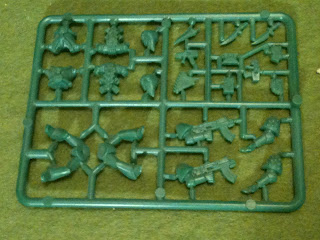 For the un initiated, this is one of the original sprues, yes I still have it! plus some of the others that I have already made up models from, but that have the odd arm or bit of equipment on. Yes even in those early days it payed to keep a bits box!.
Now fast forward to today, and I have not only my beloved Blood Angels, but Tyranids, Guard, Chaos marines, and Orks. With all the great new stuff coming out for the Blood Angel chapter, I have kept my interest and occasionally adding the odd unit here or vehicle there. Now I was on the Forge World site a few weeks ago, and looking over the classic marine Armour sets that they do. I pondered the idea of a Veteran Squad for my marines using the Mk 6 Corvus armour . Last week, I happened to be in attendance at Warhammer World, for the GCN Annual General Meeting, as the Bedford Gladiators is a member club, and I am an area rep in my own right anyhow. Now as lots of you will no doubt be aware there is a shop at Warhammer World, that can sell, unsurprisingly, pretty much all that GW make, including the Forge World range. So I bit the bullet, and forked out £50 for two packs of 5 Corvus armoured marines, and a classic Heavy Weapon pack,consisting of 2 flamers, 2 plasma guns and 2 missile launchers. On getting home, I hadn't realised that the troops come unarmed, so a quick call to my chum Matt, and 7 Bolters were ready to equip my marines (thanks mate!).
I decided to add some of the Bolt Guns from my classic sprues, to give the impression that these hardened warriors were indeed veterans, and had the original weapons, no doubt carried over miriad campaigns. 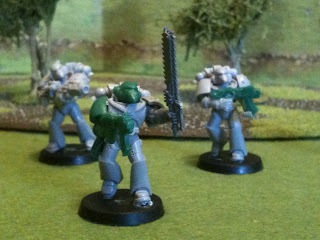 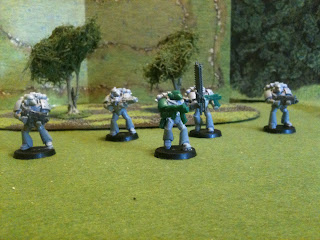 The first 5 marines await thier Battle Brothers for undercoating! 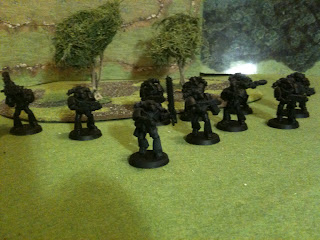 The completed squad all undercoated.

Whilst busying myself with constructing my Veteran squad, I was finishing off some of the Models recieved at Christmas..my Orks. 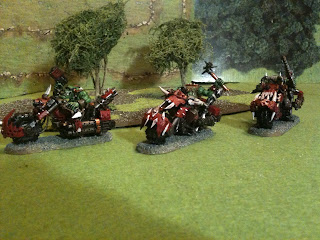 Ork Bikers added to my existing unit brings the count to 6 bikes. 3 was just not enough! 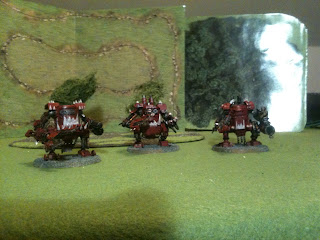 Killer kans. well you just have to, don't you! I had always intending getting these when I had built my Deff Dread, but one thing leads to another, and the purchase is superseded by the new hotness... but finally here they are. 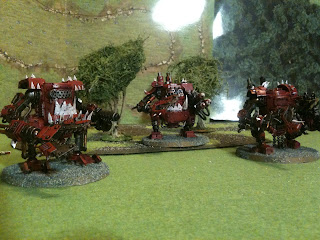 a closer look. I did enjoy making these models, there are lots of options and details you can add to give them the look you are after. 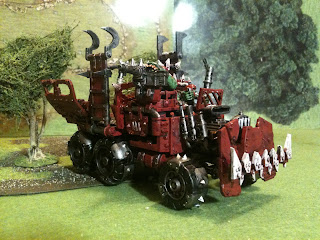 And finally a Trukk. This comes in the Ork Battleforce,together with the Bikes, and 20 boyz yet to be built. I was pleased with my first Forgeworld purchase of the marines, and at Matt's advice I may be looking to add a little something from Forgeworld to my Ork army...hmmm Ork Megadread!
Posted by DaveWilkin at 16:45 2 comments:

Well, I have been very busy since Crimbo,and have managed to get quite abit of gaming in!
Firstly I had the game of Space Hulk : Death angel, with 5 players. And mighty fun it was too! I hertily endorse this as £20 well spent. The other players quickly got the jist of the rules and all concerned had a great time. Next, more Board Game madness, with a present from her indoors for Xmas...Horus Herecy, by Fantasy flight.

When you open the box, and you can see why they call these sized games coffin boxes..there is a mountain of stuff.

8 decks of cards, a great looking board with 3d plastic terrain, and loads of minis. I would say that the rules are a bit on the complex side, so not for beginners. But Mike and myself worked through it and managed to get a feel for the game. I think after that initial game, we could have another with more enjoyment and use of pure strategy, rather than stopping to read the rules every so often, as you do when learning a new system.

Next my Empire Warhammer army had it's first outing with the new 8th edition rules. I have had one other game with 8th, using my Orks. Not sure I like them. I think that people get to like the way a system plays, then when the next iteration is produced, and one that departs so markedly than the previous edition, there is a good possability of players moving to other systems! If 7th was still here, I would probably be playing more Warhammer, I think. But hey, here it is... 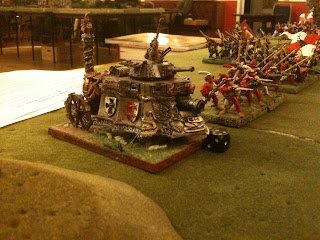 My steam tank puffs towards the enemy....Handgunners and spearmen in support. 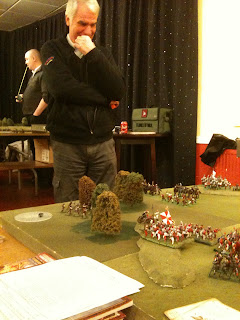 Derek, my opponent, muses on where to put the next salvo from his volley gun. Yes this was Empire Vs Empire...and both in red and white uniforms....confusing! I suggested Dereks side play skins,and/or my side use bibs! 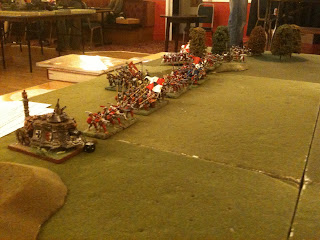 My army squares up. Like vs Like battles are interesting, especially when they are Human protagonists. My force was more akin to a 7th ed build, whereas Derek, obviously more proficient with the newer tome, had a big 40 man spear unit, with outriders and knights in support, and lots of guns, Volley gun, Great Cannon, and a Mortar. A fun game was had however, with plenty of help with the rules from the terraces....cheers, Terry and Steve!
On the painting table we have the remnants of the Christmas offerings. Orks! yes the 40K kind. A Regiment box with 20 boyz, 3 bikerz and a Trukk. I also purchased some Killerkans. These are, with the exception of the boyz, nearly all completed, and I will post the pikkies for your delectation later.
Off to the GCN AGM on Saturday, at Warhammer world in Nottingham. I do like going to Headquaters, if only to soak up the very aura of gaming, and have a pint and a burger in Bugmans!
Posted by DaveWilkin at 20:32 No comments: