And we come to part 2 of the bumper post. This took place last night, and utilised some of my newest projects..I really should post one of my projects in it's own right.
Well, good mate Derek and I planned a 28mm napoleonic game using Black Powder. Well, I wanted to see my Army in all it's glory. I now have 8 Battallions of Infantry, 2 cav, and an Artillery battery. 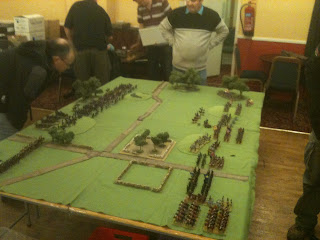 The game set up, with my French columns on the left, and Dereks Allied forces on the right. I won the toss, and started by pushing one of my infantry brigades to close with the enemy, with the other in support. The command roll scored a double one! which in black powder means I go three moves, I was almost on top of the enemy already. The other brigade was brought up in support, and my Artillery fired on the enemy line to try and thin any flanking moves. 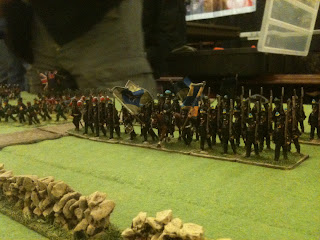 One of my new painting Projects, lent to Derek for the game. Brunswickers. All Perry miniatures, with Bodys banners flags. As they are all black, with black belts these were very quick to paint up, and are a pleasing addition to my collection. I have the Avant Guard Jagers on the painting table at the moment, and plan to complete the Corps with the addition of the third line Batallion, and the Leib Battalion, with perhapse the Uhlans, Hussars and an Artillery battery added later. Derek decided to advance these troops into some wealled fields to his front, 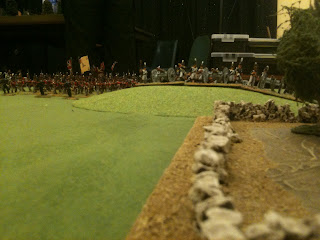 With his artillery supporting from a nearby hill. 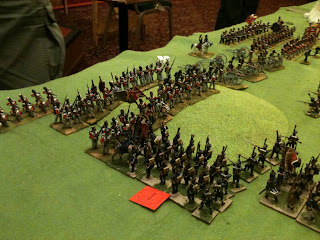 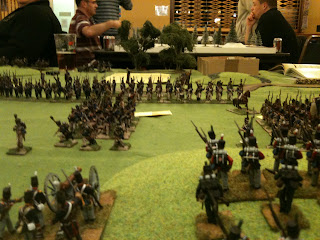 The British and Portuguese look on as the supporting French Brigade forms line, realising the attack has faultered. Note the big gaps in the forward French brigade, as units are removed as casualties from withering British musketry, 3 rounds a minute! 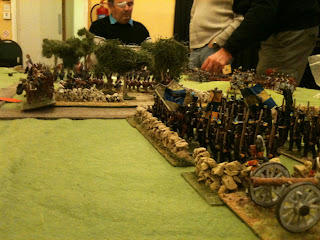 Brunswickers with supporting Horse gun look on as my Dragoons charge some Light infantry in the orchard. They are sent over to join the fight, wich tips the balance in the allies favour, and the Dragoons are lost, but the Lights are removed as well,as some consolation! 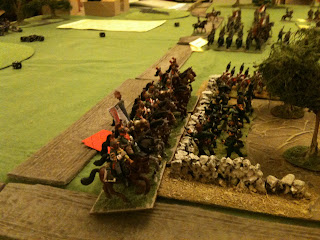 The Dragoons before the Brunswickers upset thier day!
A great game, and a great opportunity to see how we have come on with our napoleonic armies. I still have lots of painting to do. Apart from the Brunswick Jagers, I have to complete another 4 line units, a Hussar unit and Line lancers for the French. I am also thinking on purchasing 2 regiments of Curassier and a Horse battery to beef up the Cavalry arm, which at present merely has the Dragoons and a unit of Chasseur a cheval, which are also newly painted..but oddly I didn't take a pic of them. A well, next time mes amis!
Posted by DaveWilkin at 10:26 3 comments:

A bit of a bumper catch up post today. A couple of Mondays ago, my good chum brian and I decided to have a set too with our Republican Romans, using WAB 2 rules, 1500 pts. 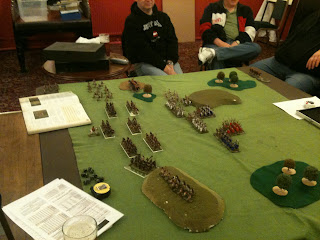 The set up, with my legion on the left, and Brians on the right.
Brian began by advancing his Roman Cavalry on his right, and supporting with his
Cretan Archers. on the left his Velites came on from the woods, to a hail of archery from my own Cretan Archers. Undaunted by this barrage, the velites charged up the hill and a desperate fight ensued. On the other flank, I pushed my swarm of 20 Velites to hold off the Cavalry. 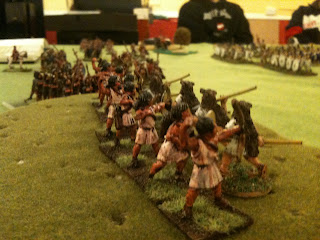 My Cretan archers were victorious but not to the point of decisively defeating Brians Velites, who passed thier morale check. 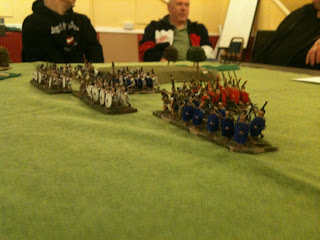 Brians maniples advanced in the centre, Hastatii in white, Principes in Blue, Triarii in red.
Exactly the same system as myself. well it is a civil war! 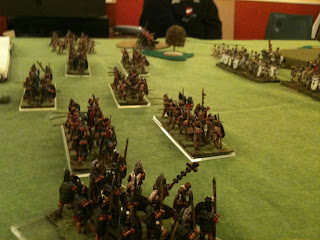 My legion prepares for the fight, in chequer board formation, with my Triarii on one flank to support the Cretans on the hill. 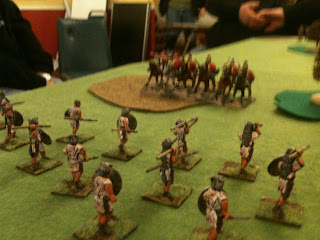 My Velites throw vollies of javelins at thier opponent, but bring down only a few, and then are charged. I elect to fire and flee,a risky maneuvre, but with the Roman Cav starting thier move in rough ground, I figured this would slow them enough to make good my escape. It was not to be, however as my usual poor luck with the dice meant they were cought and destroyed. 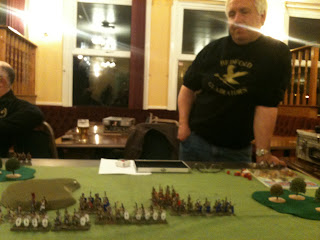 Brian looks for his next move, as his legion come on in echelon formation. 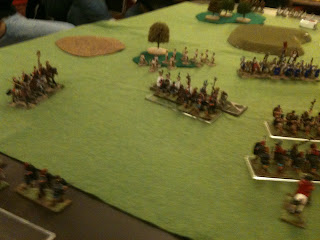 I charge the nearest unit but things do not go well in the ensuing melee. 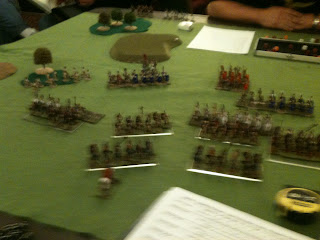 Soon, all units are engaged in the centre, in a chaotic scrum, that leaves no room to utilise the special manipular rules to any great degree. The battle although going well at the start, begins to go against me. 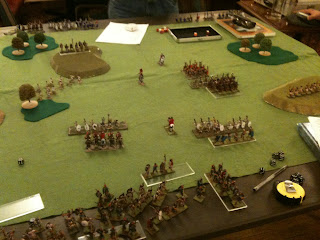 Just look at the pile of dead on my table edge, compared to Brian!
And so another chapter in Roman history is made, and another would be Emperor has his hands nailed to the Senate door! A great game, and good to get the Republicans out again.
Check out the next post for some of my latest models!
Posted by DaveWilkin at 09:57 1 comment: