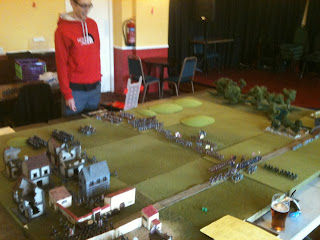 Today was the club all day Sunday meeting. And we had a combat debut with our 28mm Napoleonic collections. Niel and I supplied French, whilst Derek came with British and Portuguese.
Using Black Powder rules from Warlord Games, we thought to give the El Perez scenario in the book a try. Derek was one or two units short, but had a few more guns, and the French were one Infantry unit short, and not the correct Cavalry units, but we thought to try as we were not far off the units required in the book. 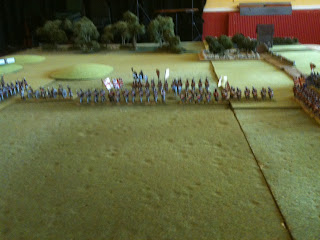 The British form line, as one column attempts to escape off board. For those who do not have Black powder, I better explain. This is a fictional battle, set in the part of the peninsular war where Britain and allies were trying to evade the French and make thier way to the Lines of the Torres Vedras in Portugal. Typified by delaying actions and rearguard skirmishes, this game is won by the British if they manage to get half thier force off thier baseline. The French win if they stop them, of course! 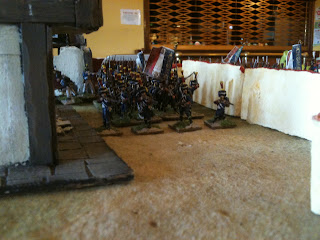 The French in Attack column, Voltigeur to the front march out from El Perez in persuit of the British. 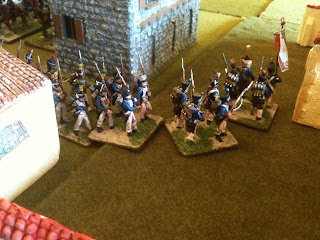 Not all the Brigades get good Orders rolls, and some wind thier way through the maze of streets in Column of march. 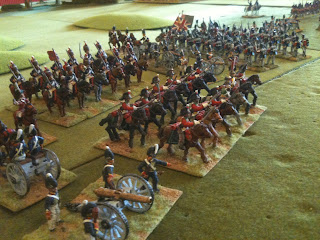 British Cavalry and Horse Artilery prepare to cover the withdrawal. 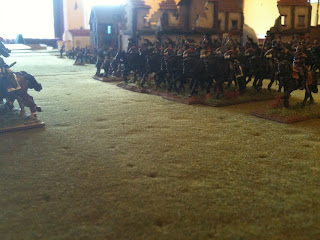 French Cavalry charges out to meet them. Some poor dice rolls from my subordinate General, and the first French Dragoon regiment are destroyed. Artillery fire disrupts the Carabiniers behind, and the Cavalry Brigade is Broken, and Flees the field. Not a good start! 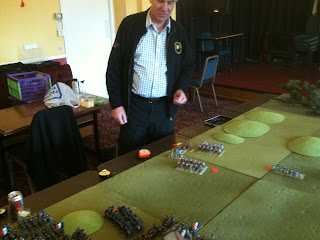 Thankfully for the French, Derek fluffs his Orders roll and the British Cavalry do not move in his next turn. 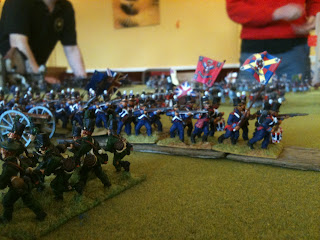 Portuguese and British Regiments make a bee line for the Portuguese border and Safety. 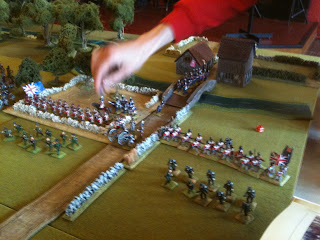 Niel sets up his Brigade in a stone walled field to cover the bridge. 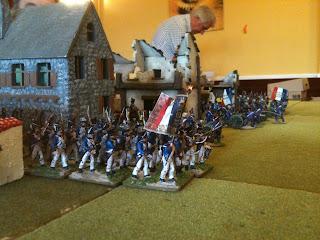 Out come the French, or at least one brigade, the other two fluff thier orders again. 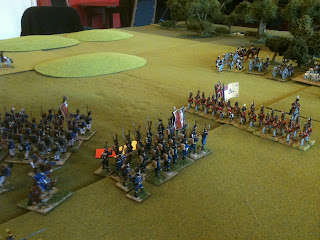 The french columns only recieve desultry fire from the brits, and smash in to the thin red line, causing two regiments to take break tests, which they fail and are removed. The remnants are now a broken Brigade, and fall back in dissarray. 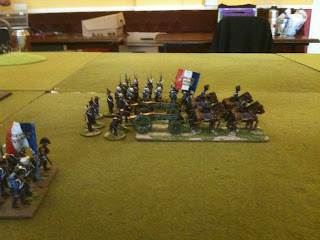 Barry finaly gets some luck and moves the Artillery forward, Along with a brigade. 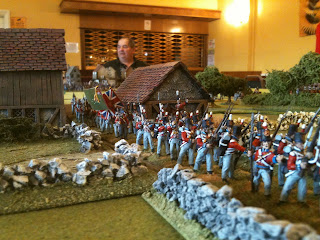 Unfortunately it is too late, as the British and Portuguese have now managed to get enough troops over thier baseline to win. 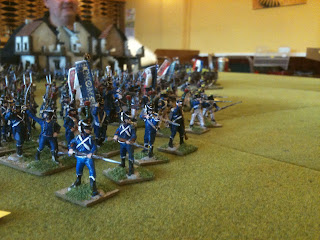 Just as the French were getting thier act together too. C'est la Guerre!
Great game and nice to play with our new 28's, on a big table ( 6ft x 10ft) We need more miniatures, it was agreed, and we will try another game in January, may be a set piece battle rather than a scenario.
Posted by DaveWilkin at 20:16 No comments: 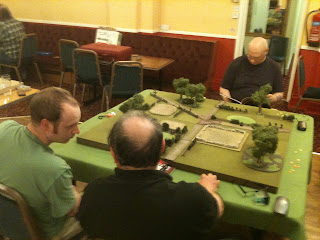 Last club day we had another WW2 Skirmish game with Rate of Fire.
Stef had painted a squad of German infantry and a StuH 42, and so we decided to have a small scale action  verses a US Squad with a 57mm ATG. 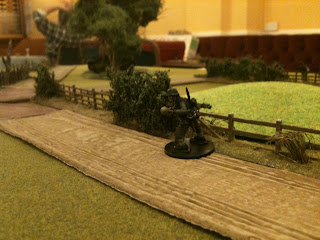 The Germans slowly advanced towards the American line. 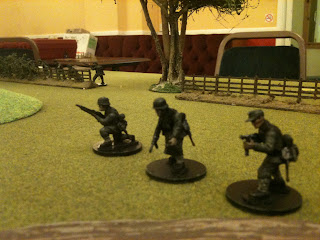 One group trying to work around the flank were met with a hail of M1 Garand and BAR fire. 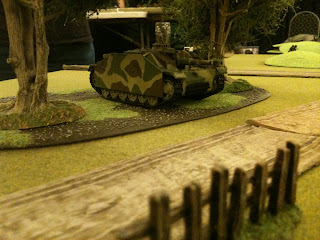 The StuH made it's way in to cover to fire on the 57 position, killing one of the crew, the 57mm fired back, but needed to roll high to make any effect. It didn't get the score and the shot bounced off. 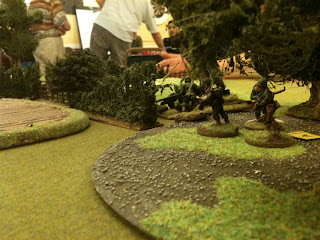 The US continued to try thier luck against the StuH, but kept either missing or bouncing off. 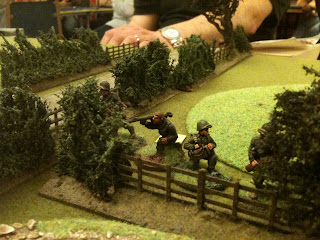 The Squad were however equiped with a bazooka. up till now it had been firing on the Wermacht units trying to get around the flank, with good results, but now the yanks brought it forward to deal with the panzer. 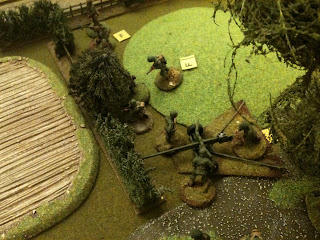 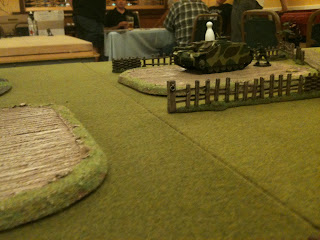 Emboldened by his success, and the total ineffectiveness of the American response, Steff advanses his panzer to get a better shot, supported by a rifle group.
The Bazooka lets rip, and a lucky shot blows the tank to bits. The suporting German infantry are cut down with fire from the M1 Garands, who also get some really good throws of the die. 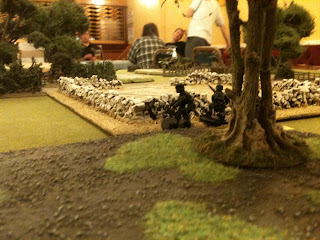 A lone MG42 crew in support mode are all that is left of the German command, after working it's way onto the US flank. it gives a parting shot to the yanks, killing one, then retires into the woods. A US victory, but a close run thing, as the German player was in the ascendant at the beginning of the game, but that lucky Bazooka shot changed thier fortunes for the worse.
I think more enjoyment was had with this smaller scale action than with platoon size games. We will try another one soon.
Posted by DaveWilkin at 10:30 No comments: 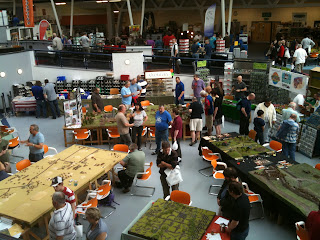 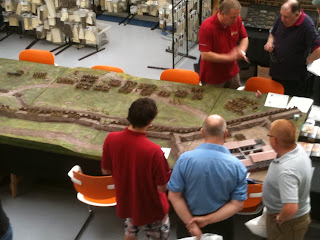 And my good mate Graham picked up myself, mark, and Steve for our annual pilgrimage to this great event. All the usual traders were there, and a selection of great games being displayed. 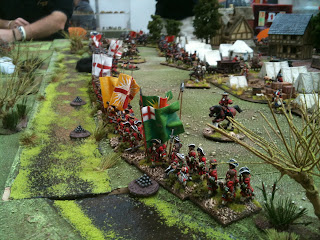 One game in particular cought my eye. Set in the Monmouth Rebellion in 28mm with some gorgeously painted minis and terrain by the Like a Stone Wall wargames group. Here is an excerpt from the show programme..
SEDGEMOOR, 1685 - "The Like a Stone Wall" Wargames Group
The game seeks to demonstrate the battle of Sedgemoor, fought in 1685, as the culmination of the Duke of Monmouth's attempt to claim the English throne from his uncle, James II. The scenario will show the rebel night march through the Somerset Levels, from Bridgewater, past Chedzoy village, to try to catch the Royalist army camped around Westonzoyland unawares. 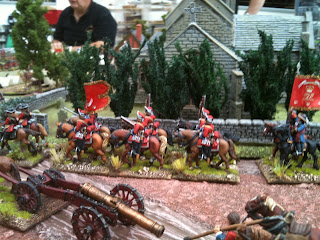 More picks from the game. 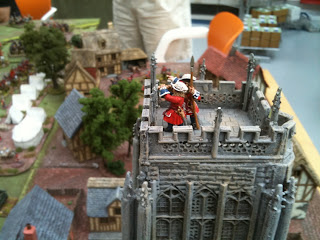 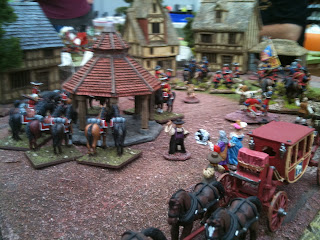 And yet more. Really inspiring stuff, well done lads on a great looking table.
As for purchases to the lead pile. I aquired 2 more T72's from a chap selling the models from the magazine by Del Perado, and a nice T55, as well as some Cesar Miniatures Somali Militiamen...Black hawk Down here we come!" Also the new rules from Osprey/Ambush Alley, Tommorrows War, out a little earlier, but a must have after the great experience with FoF.

A good excuse to pit some of our AT43 minis against GW Guardsmen perhaps!
Also , as we got a portion of a sprue from Warlords ECW infantry box as part of the now usual free goody bag you get with entry to the show, I asked all my non ECW collecting mates if they would mind parting with thiers..which they did! I purchased some metal pikes, and a command unit, and now have enough for another regiment...cool!
Posted by DaveWilkin at 10:49 No comments: