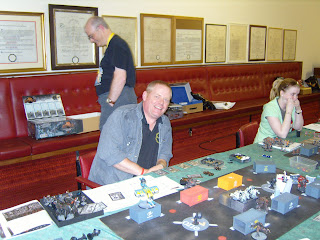 Hi, and welcome to my new blog.
As you can maybe tell from the title, I am a gamer. I mainly do miniatures tabletop gaming, but like boardgames and console (PS3)
I will post on my gaming activities, modelling, club games, and any related gaming stuff that takes my fancy.
I have a wide rangeof interests, from Historical gaming to Fantasy and SF...yes that means Warhammer and 40K, but also AT43.
My current interests are English Civil War, using mostly WHECW Rules, but also an adapted form of Black Powder rules, and Ancients, mostly WAB 2.0,using 28mm but also FoG in 15mm. I also have an interest in a new system (well new ish!) Malifaux.
My latest project has been a new Early Imperial Roman army using Warlord miniatures. I found them very easy to construct and paint,and the shield transfers are a doddle to use, and set off the mini nicely. Much better than painting the design by hand, which I would never get anything like the results. 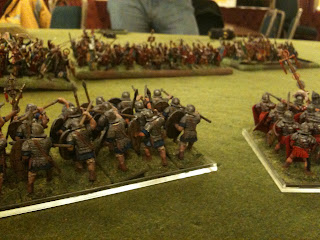 My new Auxillia, supported by a Cohort of Legionnaries. The only thing about Warlord's Auxilia is you have a bit of a problem getting them to rank up...as you see by the haphazard bases! 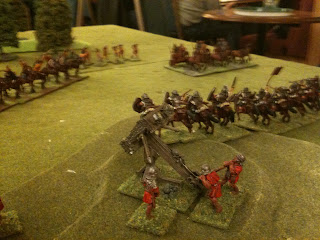 Roman Tormenta rock thrower. Part of the Roman artillery set, nice clean resin casts, easy to assemble, and as you see paint up a treat. Some people don't like "gimmick" weapons, but I think it gives another element of fun to the game, and the models look good too. Flankingthe Tormenta you see my Auxilia Cavalry. Again nice sculpts, but a bit of cleaning up required, as there are feeder strands all over them from the casting process. Once these have been dealt with they paint up nicely enough. The shield transfers are from Little Big men for these. I must confess I thought the resulting design would have been brighter, but you actually apply what is on the reverse of what you see on the card of transfers, which turned out duller. But for all that a nice model. 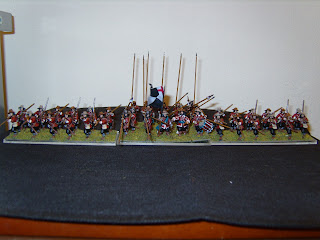 Currently just off the painting table I have just finished another Warlord product. ECW Pike and Shot regiment. Painted in Sir Allen Apsleys Regimental colours. With a nice standard purchased from Courteys miniatures, who have started producing flags for the ECW and ACW periods. 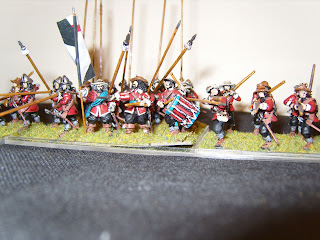 These are being rushed into service for the big ECW game we are organising at the club
http://gladiators.wordpress.com/
and I hope to purchase another box to be turned into the Kings life guard regiment,for which I have another of Courteys minis flags,http://www.curteysminiatures.co.uk/ and also start the Cavalry box and Mortar I have on my "to do" shelf. More news on that later.
Posted by DaveWilkin at 00:19 No comments: