Another game with Hail Caesar. This time Derek and I try the Greek pincushion up against the. Roman buzzsaw! 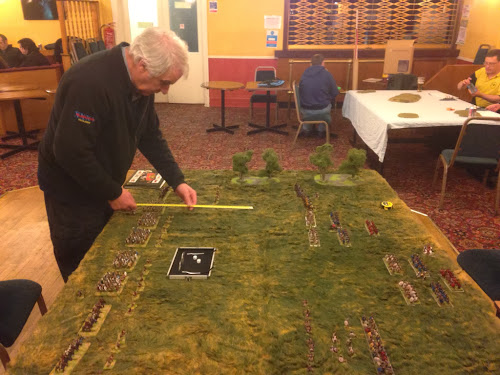 It was my first move and the division in the middle failed its order, so the lights, nearest the camera, and the other division moved on slowly. It was only later, on reading the rules for maniples we realise they will nearly always manage at least one move. Here we see Derek making his initial moves. 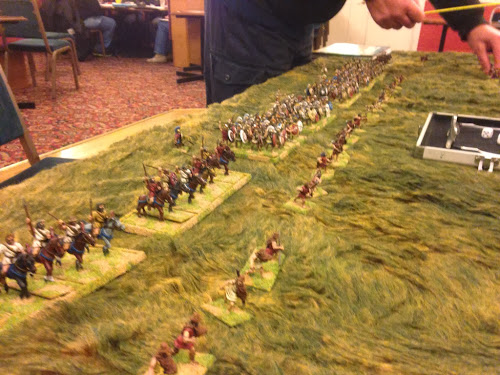 Phalanx in the main body, lights to the front, and cavalry on one flank. 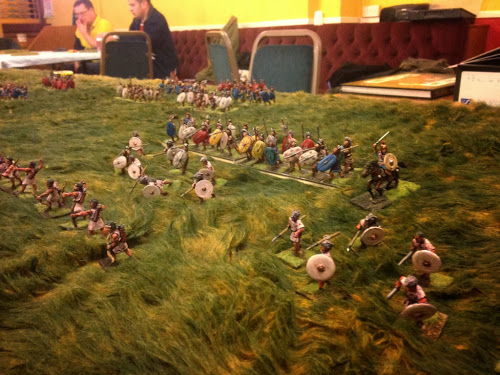 My lights, 2 units of Velite, with Cretan archers in front, supported by Italian allies. The only regular size unit in my force. 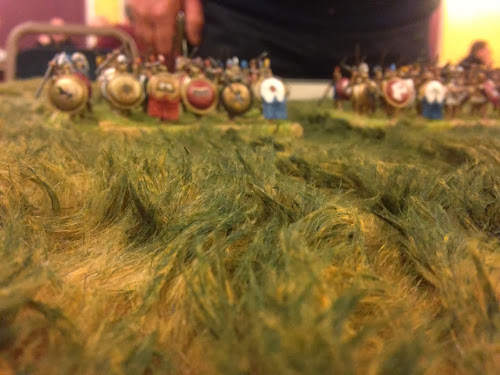 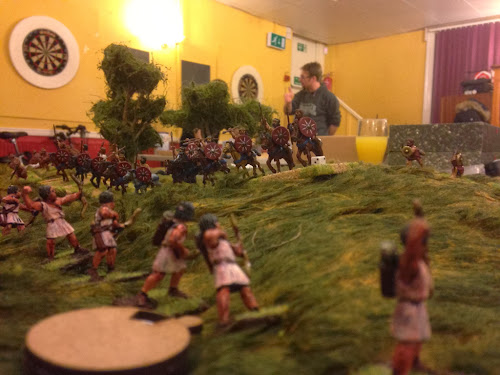 Greek cavalry are met by a volley of archery from the Cretans. 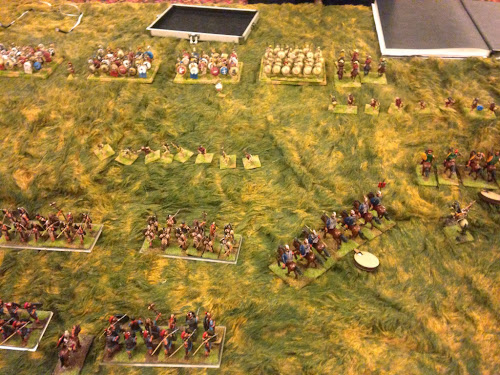 The Romans have cavalry too, a unit of light and one of Medium. They take some casualties from the Greek peltasts and archers. 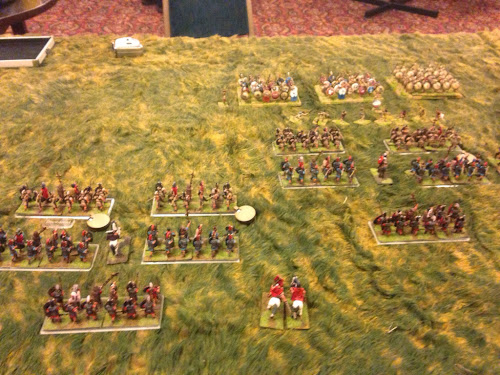 My Romans come on in the tried and tested formation, aha status to the front, principles, then Triari in the rear. 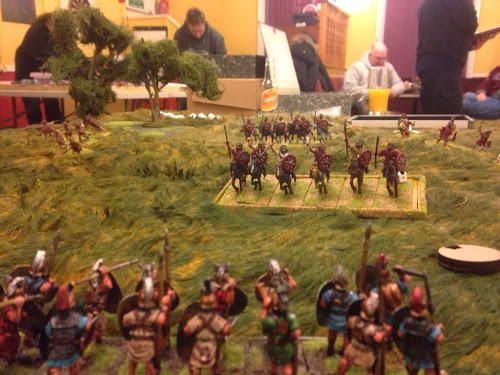 Having dealt with my light troops, the Greek cavalry, itself badly mauled, confront the Italians . 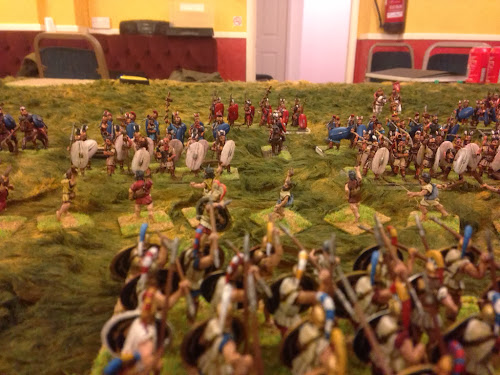 The roman maniples finally get to grips with the Greeks, hurling volleys of pila. 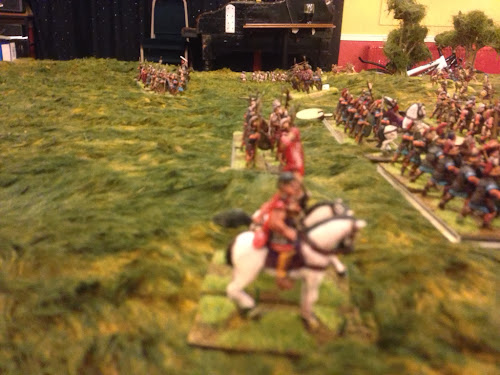 My general urges them on( we gave c in c's leadership of 9 division commanders, 8. 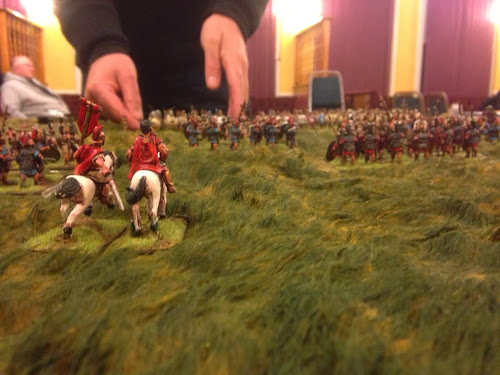 The maniples start to tear apart the Greek phalanx. OK some good dice on my part may have helped! 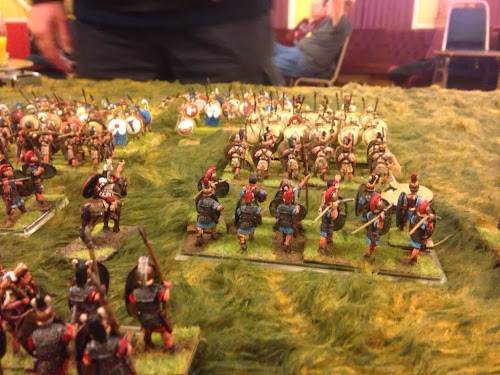 The meat grinder continues until the end of the evening. I offer Derek an honourable draw, which is graciously accepted, but Derek does concede that in his opinion the Romans had the marginal upper hand.

A great and interesting game. Next week....Saga!!

Posted with Blogsy
Posted by DaveWilkin at 15:56 No comments:

With your shield or on it!

Another great game at club. This time an outing for my new(ish) Greek Hoplites, against my good mate Derek's Greeks. We are using Hail Caesar rules recently, and this is my second game. 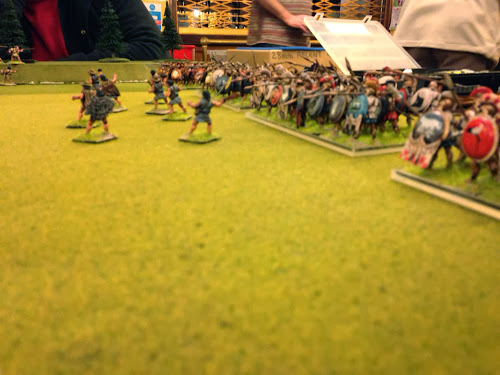 My heros form up, 4 phalanx, one of which is the obligatory Spartans, with 2 small slinger units,and a small javelin arms unit of Helots.Plus Derek loaned me 2 small units of Light cav 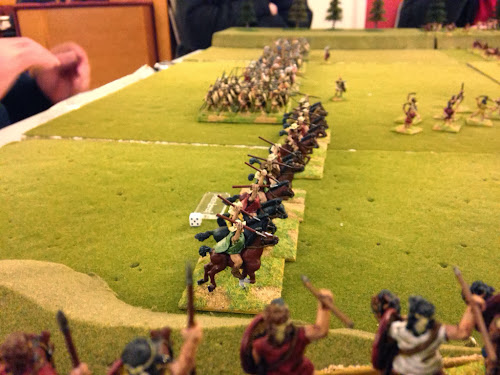 First things first, I sent my cav to the high ground on my left to try and lure Derek's cav away from the main action, in the distance, you see Derek's initial deployment. For Derek's initial move, he sent his light archers, and slingers forward, and a small unit of Java armed hill tribesmen made their way forward on the opposite high ground.

In my move I tried to counter the light troops advance with my own, with limited success, only the Helots did much, by moving to the hills to counter Derek's tribesmen. 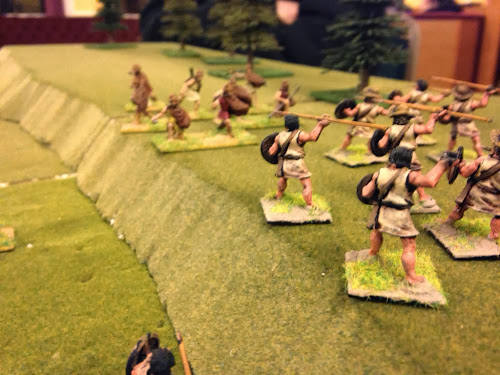 Meanwhile the cavalry busied themselves chucking pointy sticks at one another, scoring a few hits 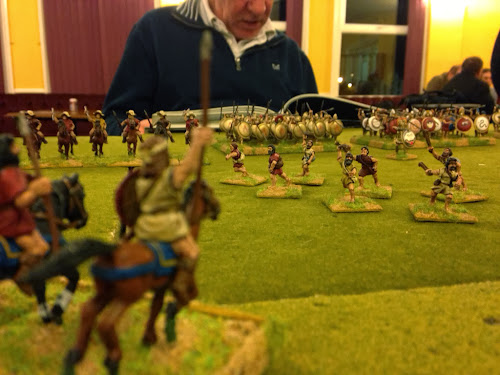 Some of Derek's Lights joined in on this action on my left, causing a unit of cav to be disordered. 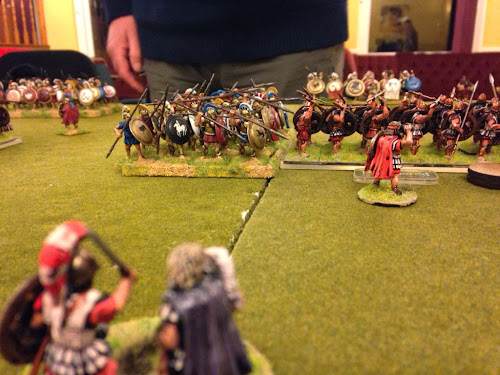 After a turn or two of this light inf and cav activity, my Spartans, ably led by my CinC ( or pushed, their order dice were dreadfull) charged forward, forcing Derek's archers to flee.

They did in the next turn attack one of Derek's phalanx, causing it to retire,but the turn after he charged them in the flank with another phalanx, as we see in this pic.

Meanwhile, the cavalry were getting the worst of it, but only marginally, and my last battered unit retired to the rear, glowering at their opponents from a distance! 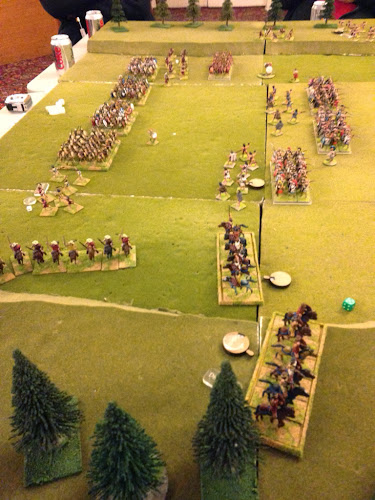 Soon I managed a few good die rolls to get the other flank moving, and a phalanx scrummage ensued against Derek's elite unit, my Spartans,on the other flank holding their own but just, due to the elite stubborn re roll " we Are SPARTANS" effect!, 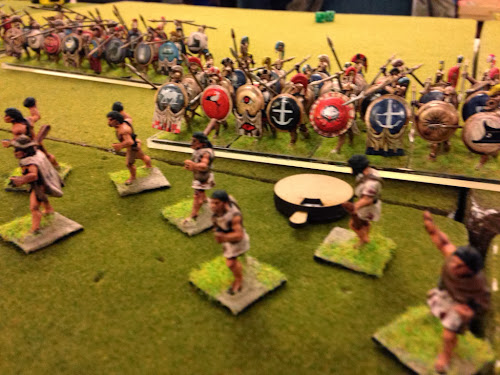 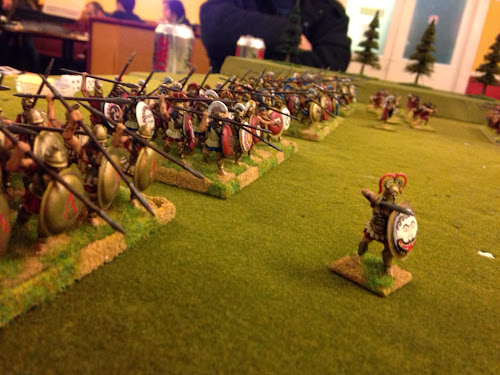 Derek's lads await the slaughter, his CinC out in front. What a hero! 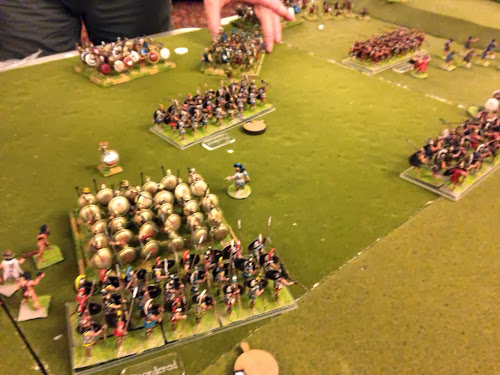 The meat grinder continues, but Derek's elites are not as fortunate with the dice as are my own " SPARTANS" yes a lot of that was said in best Gerrard Butler accents!! 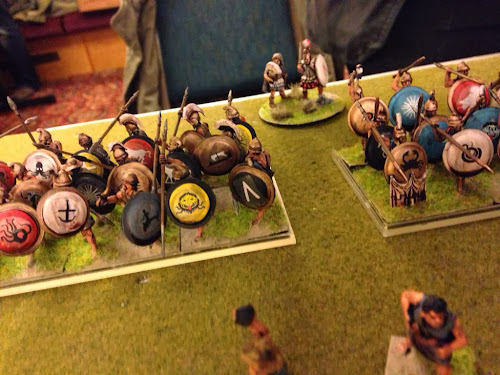 Both Derek's units, his elites, and the unit attacking my Spartans, now under a lot of support from units coming up, broke. And as the time was nearly upon us to leave, Derek duly conceded. 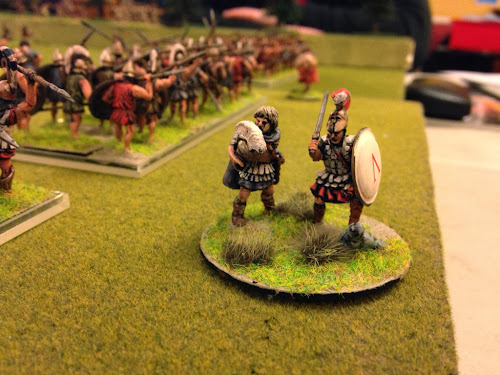 A shot of the victorious commander, yes he is the Jason figure from Salute!!

Posted with Blogsy
Posted by DaveWilkin at 16:17 No comments:

We'll I have finally succumbed and joined many gamers in the playing of Warlord Games great WW2 skirmish system Bolt Action. 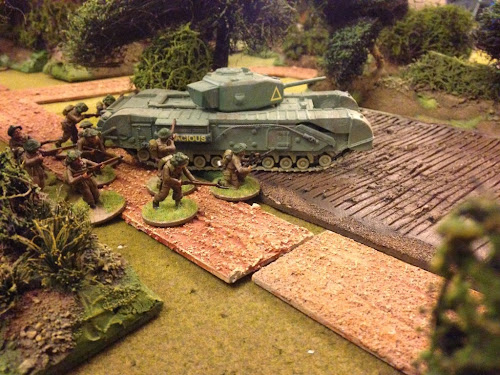 My lovely partner gave me the British 500 pt set and a Cromwell, to which I added a die cast Churchill purchased from my local model store. 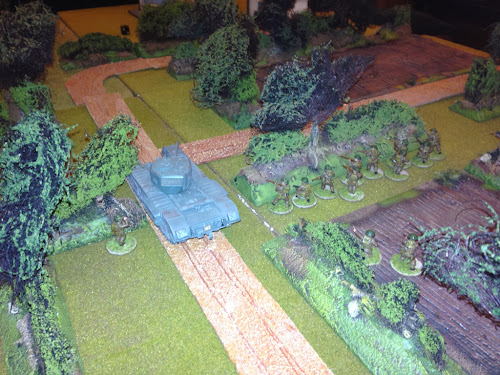 Last club night they had an outing against my good friend Terry's Germans,with a loaner of my panzer 4, 700 pts a side, I had a 2nd Lt with a sgt, arty observer, Piat team, vickers team, 2 10 man squads with NCO, armed with Sten gun, and a Bren gun. I also included a die cast truck I had for a few years.Terry had 2 squads of Gerry's 10 man with SMG armed NCO , MG 42 and 2 panzerfaust. A 2nd Lt with extra man, an MG42 MMG, and a Panzershrek team, plus my Pz 4. 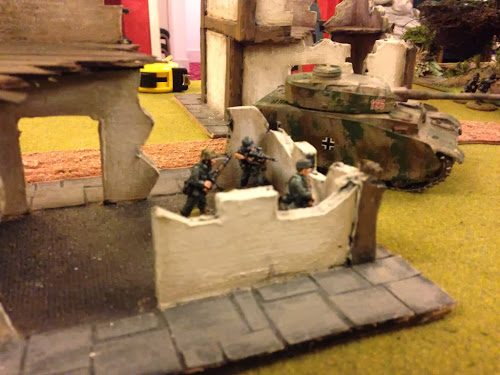 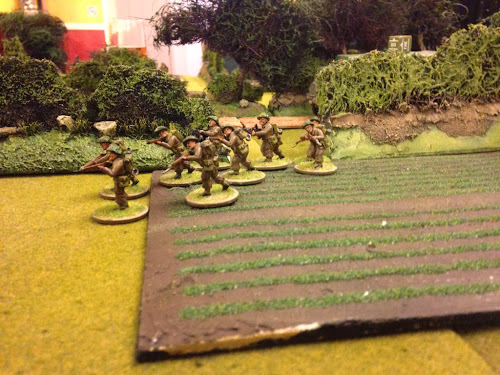 Terry's Wehrmacht defend a small village, my Pz 4 in support. 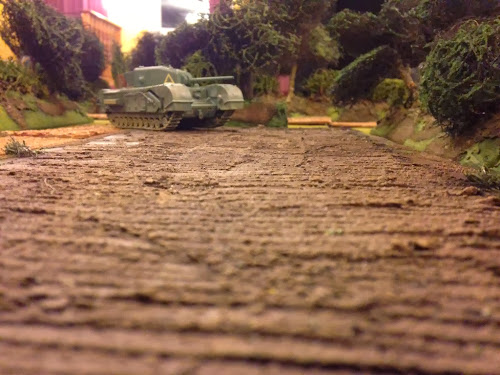 Supported by my die cast Churchill.

Posted with Blogsy
Posted by DaveWilkin at 18:22 No comments: