My old Chum Brian came round for a game of Warhammer English Civil War. I had sorted out the two armies into 2700 pt forces, and  as Brian was the guest, asked him to choose his force. He Chose Parliament, which obviously left me with the King! 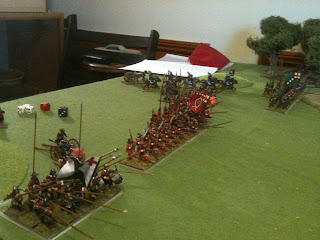 Parliament's forces, with the London Trained Band in the Red, Greencoat Regiment in the Distance, and Rainbrows Regiment in the Foreground. Near the small hill are a unit of Curassier. Parliament also has a unit of Gallopers, a unit of Trotters, unit of Dragoons, 2 falconnetes, a Saker, and a unit of clubmen with Agitator, and a Master Gunner. Lead by the Earl of Essex, and with Oliver Cromwell as Lord Generall of Horse. 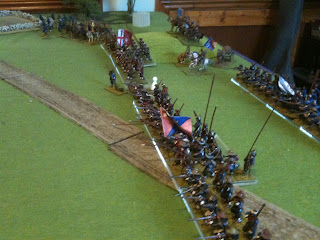 The King's forces, with gerards Regiment to the fore, with The Kings Lifeguard of Foote next to them, and Ruperts Regiment to the rear. In the Distance we see his Majesty with The Royal Standard and the Gentlemen Pensioners. The Royalists also have A Saker, one Falconnete, a Galloper unit, A trotter unit with Carbines, and a trotter unit with Heavy Armour, as well as a unit of Firelocks.
The Game commences with an artillery fusilade from both sides. 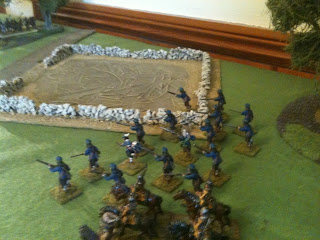 and advances on both flanks. here we see the Carbine armed Trotter Cavalry supporting the Firelock companies advance. Opposing them are the Clubmen, misdirected by the Agitator, who after dithering for a move decides that it is best to move them off the Parliament base line! 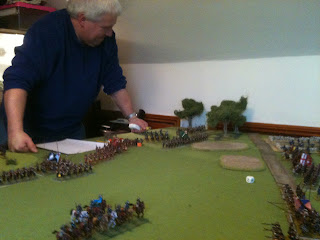 Just in time Brian moves an officer to aprehend the seditious fool, and set the club men to better use!
On the other flank Parliament's cavalry, supported by the Dragoons, blast the Royalist horse from the field, and move rapidly to the flank. 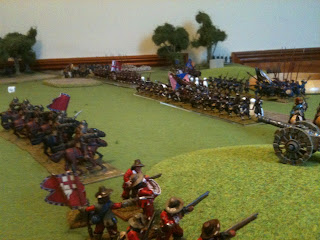 There are frantic maneuverings from Gerards, and Ruperts Regiments to bolster the flank, but Ruperts men falter, and a company of matchlocks flee the field, together with the Saker crew. 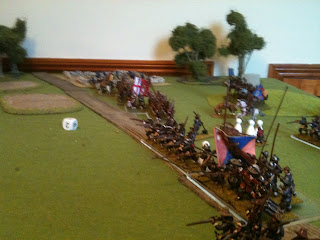 Gerrard's regiment are decimated by accurate Parliamentary gunnery. and, out of powder, the Kings troops begin to fall apart and flee. 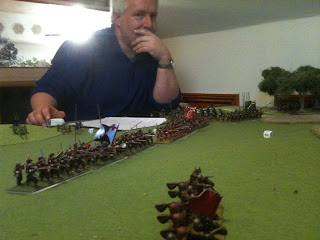 Brian surveys the final act. Pleased with this days work! The King is Routed and Parliament carries the day.
A great fun game. We will have to have more of these!
Posted by DaveWilkin at 20:29 1 comment:

AT 43 giving it large

One of the Systems I enjoy playing is AT 43, from the now defunked Rackham. It was a sad day when Rackham announced it was to call it a day, especially as I have lots of thier minis from 3 factions, Cogs, Therians, and UNA.
Last Sunday myself and maurice arranged a big game with a few rule ammendments to try for the bigger format. Usually the game is played with one force, and one command, but this game involved over 5000 pts and was split into 3 companies per side. Each army needed to have a rank 5 leader as theforce commander, and other subordinate commanders to lead each company. The force commander would bid for initiative as usual, then would allocate Leadership points between the 3 commands. Each command would then organise the unit order of play activation as usual. Each side would activate a unit from each company, and then the other side would have thier turn. 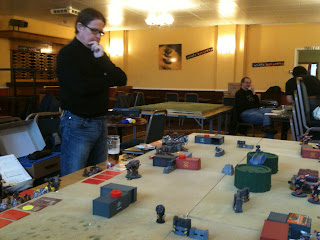 maurice considers his move for the Red Blok. We had VP for 3 objectives on the table, scoring 2 VP per objective, 1 VP per enemy unit eliminated, and 1VP for eliminating the force commander. 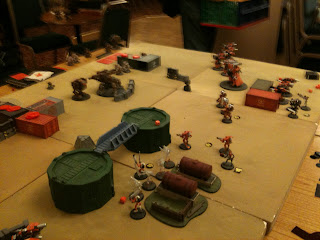 My Cog Commander , G Nocrat G09, accompanied by a squad of Stalkers, race to capture the central objective, flanked by a Warmonger Jammer team. 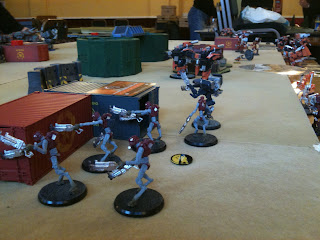 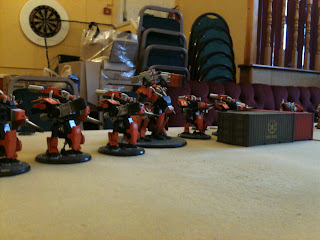 Massed Cog armour on the other flank lead by a Vandal, and 3 squads of 2 Marauders 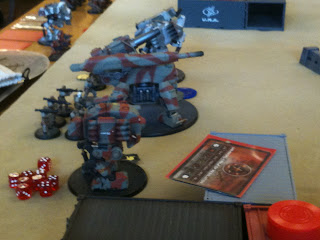 Red Blok Dotch Yaga and supporting walkers,and RPG Soldaty, take a dominant position in the Redblock line. The game whent well and I think benefit from not using standard Force organisations, and maybe having a player commanding each company, We will see if another game can be played to this scale again soon.
Posted by DaveWilkin at 10:21 No comments:

Work has me away all week at the moment ,so little if any time for my hobby..boo hoo!
Still a couple of purchases, firstly the new Stormraven from GW. As I said in the last post, a good transport for my new Sternguard squad. 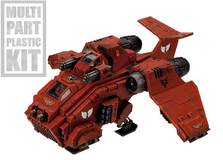 GW are making a few flyers now, and good to see them as it gives another dimention to the game. I also purchased some Ork nobs in Mega Armour 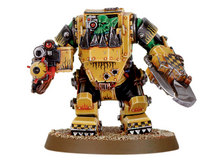 so plenty to be getting on with there...when I have some time.
I also picked up a box of Spartan Hopolites from Immortal Miniatures. This company is fairly new on the scene, and came out with thier Hopolite plastic box set last year. I have been interested in having a go and seeing what the minis are like, so as the new Spartan box was recently added I purchased one. At only £12 for a box of 24 this is good value indeed. As you open the box, you see some slide transfers for the shields, the famous inverted V. A full colour flyer telling you a bit of the history and the sprues themselves. Very good quality, on a par with Warlord or the Perry's the other main protagonists in the plastic revolution.

Only a quick post this time, as time is short. But I hope to post on the progress made with these model projects soon.
Posted by DaveWilkin at 09:52 No comments: