Vikingr with an axe to grind

As promised, the latest game from club, a game of Saga. This one was a 4 way affair, with my Anglo Saxons, who allied with my Vikings, commanded by Steve. Anglo Danes from Terry, allied with Derek's jomsviking, who he played using the Pagan Russ list.

We determined allegiances at the start using playing cards, 4 kings and 4 queens were taken from the deck, and the kings randomly given to each player, same colour suits were allied. Then at the beginning of each turn, the players were given a contrasting colour queen, with which they could secretly choose their alliance for the next turn. This was only allowed for the first 4 turns out of the 6, at which point your allegiance was locked. 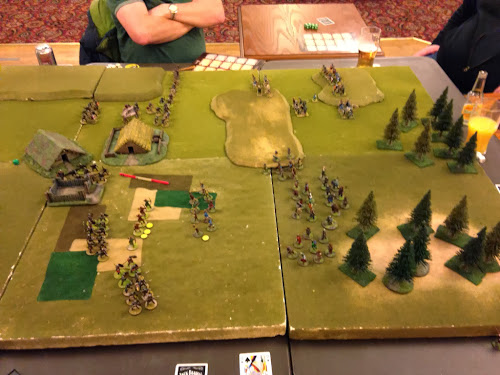 The game underway, with my anglosaxons top right, Steve's Vikings bottom right, Derek's Russ top left, and Terry's Anglo Danes at bottom left.
The action began with my levy archers running forward incurring fatigue and losing a perhapse inevitable poor volley of arrows in to the Russ, I moved my Herthguard with Warlord to my left through the village, hoping for a chance to spring on the enemy if chance presented itself, I followed up the Levi with my supporting units of Warriors.
The Russ moved forward, and threw javelins, which I managed to save against. However one of the saga abilities enabled Derek to cause casualties on all fatigued units.
" witchcraft" Steve and I cried!!!
Viking's moved up taking the high ground, and Terry's Anglo Danes also advanced but had a saga ability to make units fatigued. A very useful partnership with that Russ ability!! 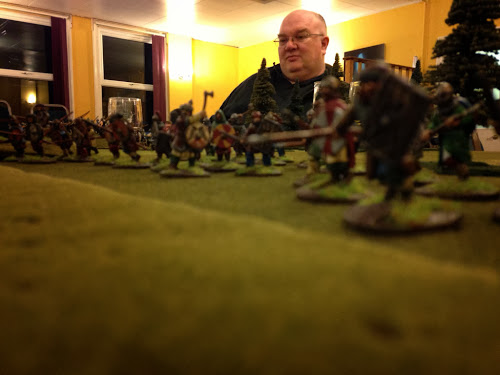 Terry's forces making good use of the saga abilities.....witchcraft I tell you!! 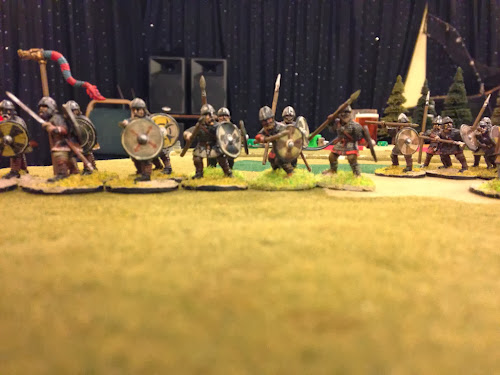 My warriors form shield wall against the Russ. 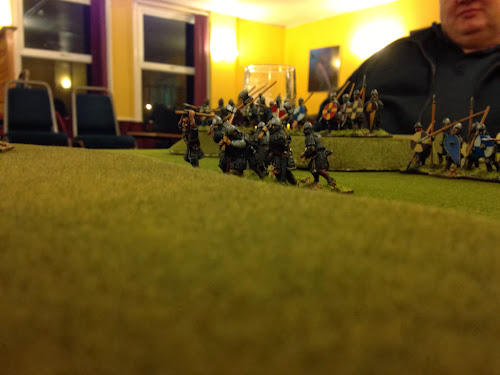 The Russ move up to chuck pointy sticks, and use more of that Saga hocus pocus . So I use some saga abilities of my own to try and get rid of as many fatigue markers as possable. 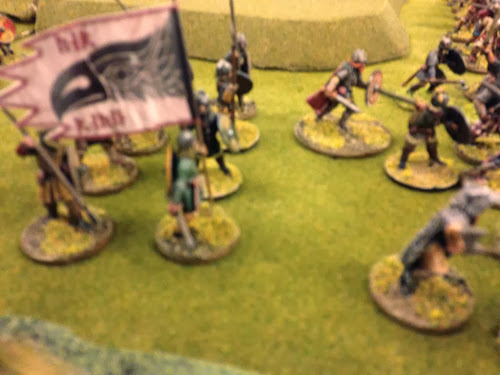 Steve's Vikingr with raven banner and wolf cloak clad berserkers make all speed to the foe. 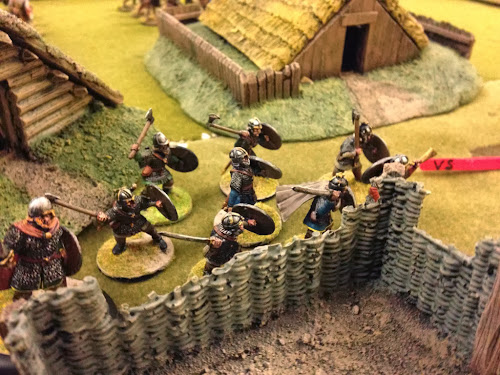 My Huscarles with Warlord making their way through the village to engage the Russ. 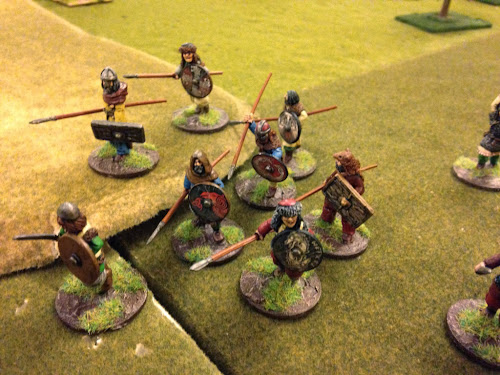 The Russ are waiting to receive them however. A series of Merle's ensue, which although the Saxons did fairly well, by the end of turn 6 the casualty count on Steve and I's side of the table was too high to recover from, and so a victory for Derek and Terry. Steve and I consoled ourselves that this was due to the witchcraft employed by the Russ!!! And we used much more conventional means.
Another fantastic game.

Posted with Blogsy
Posted by DaveWilkin at 16:22